Whereas, Srinagar Smart City Limited (SSCL) invited applications for the post of Junior Engineer (Civil) on contractual basis for a period of one year vide its

Whereas the merit list of the candidates who appeared for interview was notified vide no: SSCUCE0/12519 Dated:12-09-2022. Whereas, the following 8 candidates were selected for the post of Junior Engineer (Civil):-

Whereas, in the meantime another vacancy was created because one candidate namely Mr. Syed Sajid Kirmani initially joined but later on withdrew his joining report citing his personal reasons. Whereas the waiting list was again operated in order of merit and the following candidates were notified vide No 14816-817 dated 24-12-2022 to join

Whereas at present, out of 08 vacancy only 06 are working and as such there are two vacancies. Now therefore the Competent Authority has approved to offer these two vacancies to following candidates whose names appear next in the merit list already notified by Srinagar Smart City Limited (SSCL). 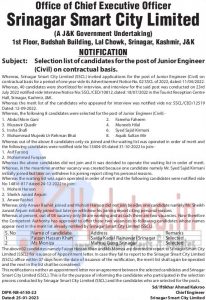